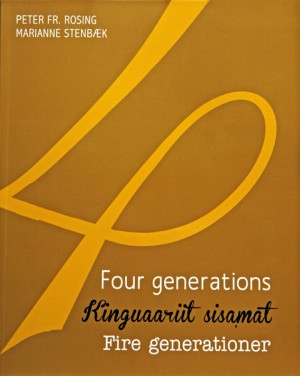 One of the most prominent families in Greenland is the Rosing family. Among its members was Nikolaj Rosing, one of the first Greenlandic members of the Danish Parliament and Hans Pavia Rosing who was the founding president of the Inuit Circumpolar Conference (ICC). The women in the family did not lead such public lives but contributed greatly the family’ success and to the community.

This book focuses on the life stories of four Greenlandic women from the Rosing family, over a hundred years from 1911 to 2012. The three women accompanied by baby Aima, tell their stories in their own words. Maria Rosing who was born in 1911 and became an honorary citizen of Nuuk before she died at the age of 96 is the central figure in the book. Her life encompasses all the old Inuit traditions of hard-work, modesty and love of family as the world around her changes from a hunting society to a modern industrialized society. The other two adult women, Ane Sofia and Najaaraq, are thoroughly modern Greenlandic women though they still embody the same values.

Their stories reflect many of the societal, political and cultural changes in Greenland during these years. Inuit women have always played a pivotal role in their families and communities; these are women of strength, endurance and good humor.

Four Generations is illustrated by photographs taken by their families. The graphic design is created by Najaaraq Rosing, one of the women in the book. The interviews with the women were conducted in Greenland over several years.

About the authors
Marianne Stenbaek is a professor of cultural studies at McGill University in Montréal, Québec and a broadcaster with Kalaallit Nunaata Radioa.

Peter Frederik Rosing, a Greenlander, is a member of the women’s family, author and former head of Kalaallit Nunaata Radioa.