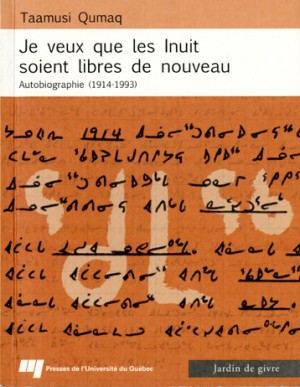 In this autobiography translated from lnuktitut to French, Qumaq views the world that surrounds him with a deeply personal and insightful standpoint, that considers the major changes that have occurred during the 20th century. From the production of Robert Flaherty’s world renowned movie, Nanook of the North, to the echoes of World War II, to the rise of Québec’s sovereign thesis – an exceptional case among the Inuit, he adopted  René Lévesque as a political model – up until the conclusion of the first agreements on the progressive autonomy of Nunavik, Qumaq witnesses and participates in the transformation of the world of the Inuit. His autobiography is a document of tremendous importance, both for the Inuit who will find a role model, and readers worldwide who will gain access, through his words, to a fascinating cultural universe.

About the author
Taamusi Qumaq was born near Inukjuak in 1914. After working for the Hudson’s Bay Company and the Povungnituk Cooperative, he was chairman of his community for six years. He started writing in the 1970s, first a book on traditional Inuit culture, and then his Inuktitut Dictionary, a long-time work that led in 1991 to its publication by Avataq and Association Inuksiutiit. Taamusi Qumaq has also written an autobiography, and numerous other texts, most of which are still unpublished. Taamusi Qumaq (1914-1993) is considered one of the leading thinkers among Nunavik Inuit.