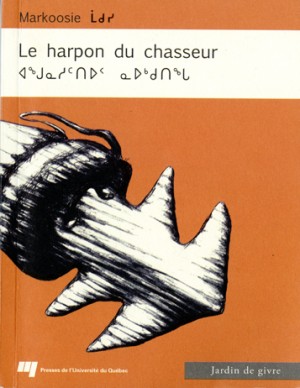 The publication of Le harpon du chasseur (Harpoon of the hunter) in 1969 marks the beginning of a new era: the first novel written by an Inuit in Canada, it symbolises a historic passage from the spoken word to a written Inuit literature. The novel, both complex and dark, plunges its reader in the violent and hostile environment that is the Arctic, in which Markoosie’s hero, confronting the death of his loved ones, resorts to suicide as his only solution. Despite its importance, this work was never edited as a book in Inuktitut; a French translation accompanies the text.

About the author
Markoosie Patsauq was born in Inukjuak, Quebec, Canada. He has earned a pilot’s license and a carpentry diploma. Markoosie’s career includes pilot; translator; manager of the Community Council, Inukjuak, Quebec; and administrator of Public Services, Government of Quebec. Markoosie was the first Canadian Inuit to publish a book in English.