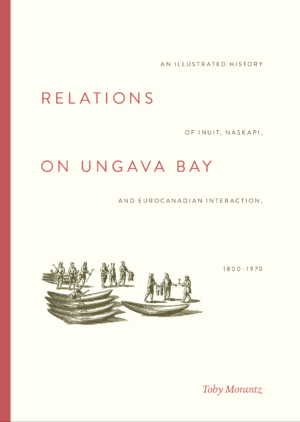 Relations on Ungava Bay: An Illustrated History of Inuit, Naskapi, and Eurocanadian Interaction, 1800-1970

For hundreds of years, if not millennia, the Inuit and Naskapis relied on the food resources of the Ungava Peninsula. The Inuit focused their sights on the coastal marine life but also turned inland to hunt caribou. It was these vast migratory caribou herds that brought the Naskapis into the region from their forested base further south. The two peoples maintained their subsistence patterns until competition in the European fur trade disrupted their way of life. Despite the dangerous tidal currents, the Hudson’s Bay Company established and outfitted a series of posts ringing the coast, beginning slowly from the first few decades of the nineteenth century. Initially the Company’s commercial interest was the salmon fishery but the fur coat fashion of the early twentieth century and fierce fur trade competition spiralled the arctic fox and related species to valuable commodities. Both Inuit and Naskapis prospered until the Crash of 1929. The combined disappearance of caribou and fur markets ushered in a period of great poverty, only to be eased somewhat with the arrival of the U.S. Air Force base at Fort Chimo. Reluctantly and by degrees, the federal government began taking charge, providing new challenges to Inuit and Naskapis in their struggles to protect their culture and autonomy.

A rich textual history in English followed by an extensive bilingual photo history in both English and Inuktitut syllabics, this account tracks the region’s “boom and bust” periods, beginning in the mid-1800s through to the start of the James Bay hydroelectric project of the 1970s, that either isolated the Inuit and Naskapi peoples, one from the other, or brought them together in cooperative efforts. Referencing both oral histories and the records of the fur trade companies, churches and government, the book reveals how the Inuit and Naskapis lived over the last several centuries as they adapted to changed environmental and economic conditions as well as imposed government directives.

Toby Morantz is an ethnohistorian who has been researching the history of Native–Newcomer relations in eastern James Bay since the 1970s. Her studies are based on the extensive Hudson’s Bay Company archives and, for the twentieth century, church and government documents, as well as oral accounts. She has published articles and books on this subject. The White Man’s Gonna Getcha: The Colonial Challenge to the Crees in Quebec was awarded the Raymond Klibansky Prize (now known as the Canada Prize) by the Canadian Federation for the Humanities and Social Sciences for the best English language work in the Humanities in 2002–03. More recently she authored Relations on Southeastern Hudson Bay: An Illustrated History of Inuit, Cree and Eurocanadian Interaction, 1740–1970, a companion to the new volume Relations on Ungava Bay. Morantz is a retired member of the Department of Anthropology, McGill University.