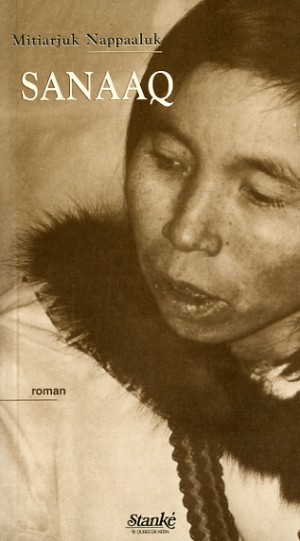 The heroine of the novel, Sanaaq, is an Inuk woman who is both strong and sensitive.  No one has captured, as has Nappaaluk, the particular challenges facing an Inuk woman growing up with her family in the Arctic — responding to changes brought by the white man and to the many particular situations, good and bad, that face a northern woman in her domestic and social life.

About the author
Mitiarjuk Nappaaluk, an extraordinary Inuk educator and author, was born in 1931 in Kangiqsujuaq in what became  Nunavik.  Even though she had no formal education, Nappaaluk taught missionaries her language and learned the syllabic alphabet invented by them. She wrote Sanaaq,  the first novel about the Inuit in the 1950s and 1960s. Published in a syllabic edition in 1983, the work remained unknown to the general public until 2002 when it was published in French.  In 1999, in recognition of her excellence in the aboriginal community, Mitiarjuk  received a National Aboriginal Achievement Award and in 2000 an honorary doctorate from the Faculty of Education at McGill University for her enormous contribution to the Kativik School Board in the field of education and culture. She became a member of the Order of Canada in 2004.
Her translator and friend, Bernard Saladin d’Anglure, has travelled throughout the Arctic since the mid 1950s. Born in France, he received a Masters in Anthropology from the Universite de Montreal and his PhD in ethnology from the Ecole Pratique des Hautes Etudes in Paris, where he worked under the direction of Claude Lévis-Strauss. He  taught Anthropology at Laval University for 30 years.  He founded the Association Inuksiutiit Katimajiit and  Études Inuit Studies magazine, the by-annual Inuit Studies congress and the Groupe d’Études Inuit et Circumpolaires (GÉTIC). In 2001 he received the Canadian Northern Scientific Award. The Author of many books and scientific articles, in 2002 he wrote: Au pays des Inuit, un peuple, un film, une légende (Atanarjuat, la légende de l’homme rapide).

In collaboration with Bernard Saladin D’anglure